What is Work Worth?

Around 20 local employers and employees took part in a round table discussion on 16th March about the Living Wage. It was attended by Emma Kosmin of the Living WageFoundation and David Clark, President of the Lewes Chamber of Commerce, and chaired by Sir Richard Jolly. Following the meeting, the Chamber of Commerce has offered its support, and some more businesses are in the process of applying to be accredited as Living Wage employers.

It is important to distinguish between the national living wage announced by the government, which is £7.20 per hour from April 1st, for over 25s, and the Living Wage calculated for the Living Wage Foundation, which is £8.25 outside London and applies to all employees over 18. This is based on a more realistic estimation of what people have to earn to sustain life for themselves and their families in a civilised society.

Sussex Community NHS Trust, which covers most of Sussex including the Lewes area, became accredited to the Living Wage Foundation in 2013 and employs 4,800 staff. Cleaners are included in their staff list, not contracted out. The trust's decision to become a Living Wage employer was welcomed by its workforce. A local residential home for adults with severe disabilities pays the Living Wage – this is consistent with their caring ethos: the home is like a family. This is more possible because it is a charity, with no paid, profit-taking directors.

There may be signs of a change in mindset among employers: an employee of a local larger business, part of a chain, said that they were now paid a small percentage over the minimum wage and this has shown in less staff turnover, better morale and working atmosphere: 'exploitation does not work'.

David Clark, President of Lewes Chamber of Commerce, offered to help publicise the Living Wage via their newsletter. He has since applied for accreditation for his family jewellery business via the Living Wage Foundation.
Posted by Lewes Living Wage at 02:13 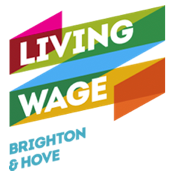